Texturing with the New Volume Builder Generator in C4D

Hey everybody I know it has been a while since my last post, but the reason for this is on the one hand a cold I had which struggled myself for at least two weeks, and on the other hand my first steps to the new R20 version of cinema 4d. It is always the point, that there is this time, when you know it is necessary to open the next door. In our case of cause the new version of cinema. There are major updates in this new version and the first ones really blew my mind. Using the new fields is as fascinating as using the new “Volume Builder Generator“. This is super-fast modeling while adding or subtracting one object with another. And when I say super-fast, everybody knows what I mean who worked with the bool object in the past. You are using 4 or 5 bool objects and suddenly the performance of the computer slows down as hell. But not with the “Volume Builder Generator“. I really would recommend everyone to take a look at the Greyscalegorilla’s Guide to Cinema 4D R20.

But now to the problem I realized working with the new system. First, I do not want to talk about how to use the builder itself as there are several tutorials out there. But at the end there is this problem you got your mesh and you want to texture every single part of the mesh. When you add a material to a child object of the volume builder it does not affect it. Why is that?
Well if you think about the system itself and how it works, it is quite clear. The volume mesher builds a new mesh using all these voxel fields, which are only fields and no objects.  One way is to transfer the whole object to an editable object. Here you got your poly-model which is to be textured using poly selections. But the mesh-builder is gone, and you do not have the ability to make corrections or add new objects to your model-builder. So how to make your poly-selections and keep the mesh-system?

Keep on mates and cheers neo. 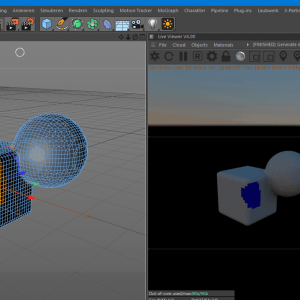